In this article i am pointing on the Lebanese internet and how the bandwidth are taken and distributed Between Lebanon , Cyprus , Syria and Egypt ,in 2011 and Before installing the IMEWE Cable internet in Lebanon was suffering from a lots of speed problems but know things have changed after the installation of the submarine international cable IMEWE which have boosted the internet speed and reduced the internet prices tarrif, However before 2011 internet sources was distributed as follow , Lebanon ( Beirut) and Cyprus are linked together through 230 Km , 622 Mbs submarine cable called Cadmos, This cable started its operations since 1995 but in 2010 the Lebanese Ministry of Telecommunication has signed an agreement with Cyprus and boosted its capacity to 40 Gb ,Tartus ( Syria ) receives internet from two sources Ugarit 633 Mbs from Cyprus and Aletar from Egypt a 5 Gbs cable which is connected in the same time to Beirut via Berytar 134 Km 5Gbs
as shown in the below Photo,IMEWE have putted Lebanon on the internet map and boosted up its speed starting july 2011 ,IMEWE a 13.000 km with 3.84 Terabits capacity links up to 9 countries Marseille ( Paris ) and passes to end up in Mumbai ( India ) including Lebanon which is originally linked from Tripoly ,IMEWE have cost the government around 45 million dollars but it has greatly improved the speed and reduced the internet prices. 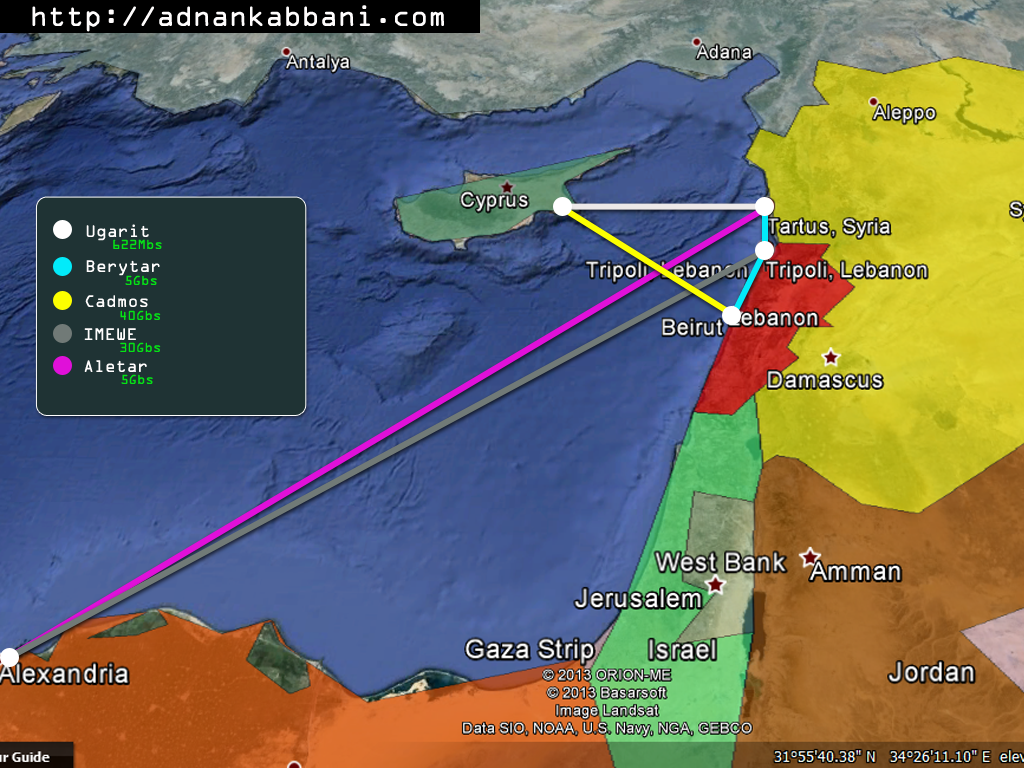